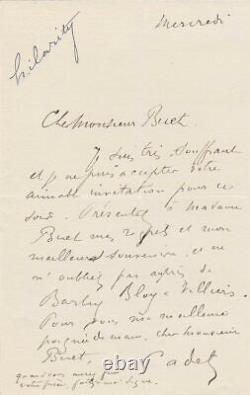 Signed autograph letter to charles buet. Autograph letter signed, bet, no date, on paper with its motto, to charles buet. Beautiful letter in which coffin announces not being able to accept his invitation. He presents his regrets to the wife of his correspondent, stating that he should not forget it with jules beardy of aurevilly, leon bloy and august of villi of Isle-adam. Charles buet held a literary salon avenue de breteuil (old Parisian arrondissement) where he received many Catholic writers, willingly Polemists, who exercised a sensitive influence on him in his articles. There were jules beardy d'aurevilly, léon bloy (with whom he became angry in 1892 about the tomb of barbey d'aurevilly), françois coppée, joris-karl huysmans, jean lorrain, laurent tailhade, jean moréas, the occultist stanislas de guaïta, the cantatrice roselia rousseil, but also a whole bohemus which his political inclinations carried more towards anarchism, as felix fénéon, paul and victor margueritte or oscar metienier. I am very suffering and I cannot accept your kind invitation for tonight. Present to Madame Buet my regrets and my best memory, and don't forget me at barbey bloy & villiers. For you, my dearest handshake, Mr. When you're done with your play, let me know. Alexandre honoré ernest coulin, dit coulin cadet to distinguish him from his constant brother, known as the eldest coffin, is a French actor and writer. Charles buet is a French writer and journalist. More information about younger coffin.

More information on charles buet. This is an authentic letter.