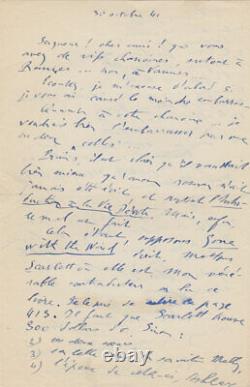 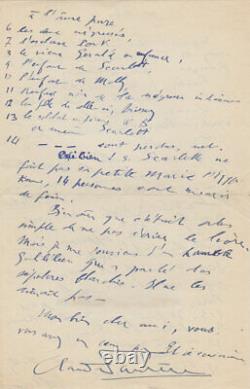 Autograph letter signed, without place, October 30, 1941, 2 pages, to a friend. Fun letter on the novel "It would be much better if no novel had ever been written and especially the introduction to devoted life.

But, at last, evil is done. And especially on an episode of as much by taking the wind as it turns ridiculously. So much in the wind is a novel written by margaret mitchell, published in 1936.

He was awarded the Pulitzer Prize in 1937. At the time of writing this letter, Victoria Fleming's famous film adaptation was already two years old.

Today a cult, the film won 8 trophies at the 1940 Oscars ceremony, including the Oscar for the best film, best director, best adapted scenario, best actress and best actress in a second role. The latter was the first Oscar attributed to a black actor or actress. That you have sharp canons, especially remies? Look, I apologize first if I caused you any embarrassment. I would like to embarrass him with one or two "glues.

" First, it is clear that it would be much better if no novel had ever been written and especially the introduction to devoted life. That being said, let's suppose gone with the wind written. Let's put a scarlet where she is.

My venerable contradictor read this book. I ask him to read page 413 again. I need scarlett to find 300 bucks of gold, otherwise. 2 his two sisters, 3 his sister-in-law, the saint Molly, 4 her husband, Ashley with a pure soul, 6 the two negresses, 7 the slave pork, 8 the old gerald in childhood, 9 the child of scarlet, 10 the child of Molly, 11 the black child of the Indian negress, 12 the daughter of this one; seized 13 the soldier locked up w. And even scarlet 14 --- are lost, net. If scarlet doesn't make her little bride the Egyptian, 14 people will starve. Of course it was easier not to write the book. But I remember a humble Galilean talking about whitewashed sepulchres. He didn't like them. My dear friend, you have a pure court. English and Russian translations available on request.

Claude farrère, pen name of frédéric-charles-pierre-edouard bargone is a French naval officer and writer. More information on farrreous claude. This is an authentic letter.

Our letters are accompanied by a descriptive sheet including a transcript. The invoices and cards we issue are instead of a guarantee certificate. France free shipping private carrier on request. Shiltonson Rare Books & Manuscripts. This item is in the category "collections\letters, old papers\autographs\historical persons".