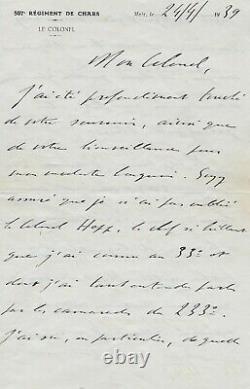 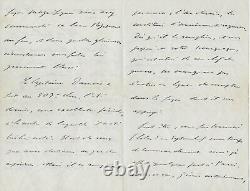 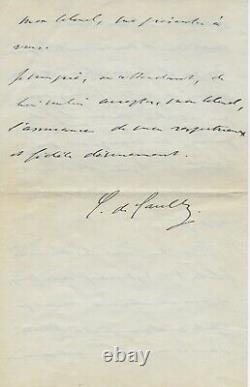 A beautiful and rare letter from the colonel de Gaulle to his former comrade of the 33rd Infantry Regiment during the First World War, written just a few months before the second conflict with Germany broke out, which forever changed the destiny of the future general of Gaulle. "Colonel, I was deeply touched by your memory, as well as your benevolence for my modest book. ["the france and its army."] Be assured that I have not forgotten Colonel Hepp, the so brilliant leader I knew at the 33rd and of whom I have heard so much from the comrades of the 233rd.

I knew, in particular, how magnificently seen had commanded this beautiful regiment by fire, and in what glorious circumstances you were very seriously wounded. Captain Darmois made an excellent time at the 573rd class last summer, after which he was very well noted.

It's one of those we're going to be in the next grade. But last year he did not yet meet the required seniority requirements. As soon as he fills them, it will be proposed and your testimony, which is that of his warlord, will not fail to be taken into account in the way in which he will be supported. In September my command time will I be assigned somewhere to bets.

In that case, I would certainly go. Colonel, introduce you to yourself. In the meantime, I beg you to accept, my Colonel, the assurance of my respectful and faithful dedication. " Entered as lieutenant when the conflict broke out, de gaulle was promoted captain in January 1915. He was wounded for the first time at dinner on 15 August 1915. He joined the 33rd infantry regiment on the champagne front to command the 7th company where achille-philippe hepp, which was mentioned as a gaule in his letter. He was wounded a second time on 10 March. He is relieved of his duties eight days after disobeying his hierarchy.

On 22 March 1916, his regiment was attacked and decimated, he was wounded again and captured by the Germans. A prisoner, he repeatedly tried to escape in vain. At the end of the war, he received the knight's cross of the legion of honor and the cross of war.

On 13 July 1937, Colonel de Gaulle was assigned to the 507th Regiment of Combat Tanks based in the quarter bound at Montigny-lès-metz, which he referred to in his letter. This is where he first became aware of the importance of the autonomous use of the tank against the regulation, which earned him the hostility of his superiors. He published at plon in 1938 "La france et son armée".

He was still colonel of the 507th regiment of battle tanks at the Metz when the Second World War broke out. He then decided to alert the army's politicians and leaders about the need to train armoured units. This item is in the category "books, bd, magazines\old books, collection".

The seller is "cyril2472" and is located in this country: en.