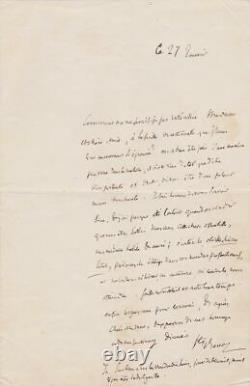 Autograph letter signed to Jeanne detourbay. Signed autograph letter, no place, January 27, 1863? Very nice letter on the state of health of the Countess of Loynes. "It is not so good as to be healthy...

" he is happy to learn about his recovery and recommends that he always listen to his doctor: "You have this essential thing, a skilful doctor & friend; listen to him, obey him in everything, warn him in time in your every feeling, and do not leave winter, autumn, heat, vous to reach. Make our sun and our good weather.

How could I not have been interested, madame and dear friend, in the health I had seen for such a time? We may be more unusually pretty in the disease, but it's nothing like being healthy... I'm glad to know you're well, and I was almost happy when I was told you were out. You have this essential thing, a skilful doctor & friend; listen to him, obey him in everything, warn him on time in your least feeling, and do not leave winter, autumn, or heat to you.

Finally treat yourself for friends, & after,... I'm down on Friday night, working day, but you're lenient. Charles-augustin sainte-beuve is a French literary critic and writer. Marie-anne detourbay, known as Mademoiselle Jeanne de peatey and by her marriage Countess de loynes, is a half-worlder who held an influential literary and political salon under the second empire and the third republic, the title mistress of literary critic jules lemaître. More information about charles-augustin sainte-beuve. More information about Jeanne detourbay. This is an authentic letter.