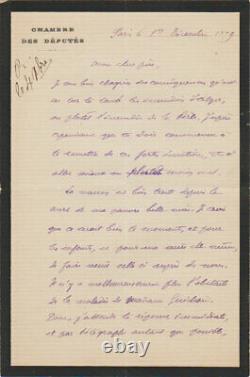 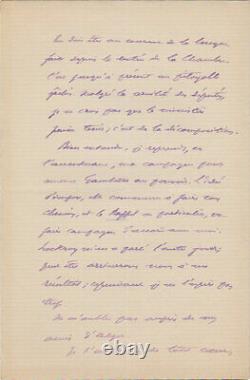 Beautiful family letter to his father. He was concerned about the consequences of the major fire on the Rue Sainte à Alger, which had declared itself on November 20, 1879.

He gives news of his children - charles and Albert -, returns to the death of stepmother and ends, as often, on a political note: "Despite the servility of the MPs, I do not believe that the ministry can hold; it is decomposition.] Perhaps we will come to a result; however I do not hope too much. English and Russian translations available on request.

More information on laminating charms-angels. This is an authentic letter. Our letters are accompanied by a descriptive sheet including a transcript.

The invoices and cards we issue are instead of a guarantee certificate. France free shipping private carrier on request. Shiltonson letters autographs & historical documents. This item is in the category "collections\letters, old papers\autographs\historical persons". The seller is "shiltonson-paris" and is located in this country: fr. This item can be shipped to the following country: whole world.