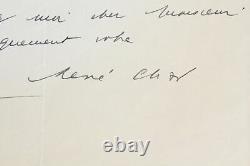 Autograph letter signed by rene char of 11 lines written in black ink. Foldings inherent in the mailing. René char wrote this letter to rené Wintzen, ancien editor-in-chief of the journal documents from 1929 to 1931.

René Wintzen then began to publish a literary magazine, wind up, of which he sent a copy to chariot. The poet encouraged him and told him to persevere while "discriminating the good grain of the tare." René char apologizes for not having a completed text to provide: "I regret it. I don't write much and I'm only an accessory poet! This emphasis on a rare writing corresponds to the idea that rené char is made of poetry and that he opposes the work advocated by valery. René char wrote little and submitted himself to the requirements of poetry: "I never cheat. I've been waiting six months for a word or a formula... That's the requirement of poetry. (interview between Char and Edith Mora, New Literary, 1965). The author also shows a distancing of poetry at the end of the decade. In fact, Char then experimented with new genres: he tried ballet with the conjuration in April 1947, but also in theatre with the sun of the waters, music in the company of balez, and finally in cinema.

However, he never left poetry and published the same year the sprayed poem. The modesty of char as to his status as a poet clearly expresses the subjection of the artist to the requirement of poetry. English translation available upon request. This item is in the category "books, bd, magazines\old books, collection".