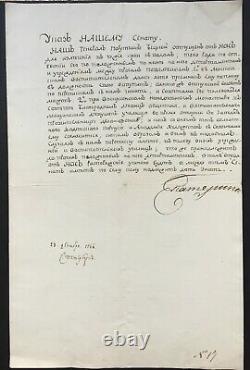 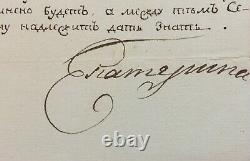 Catherine ii / catherine the great - letter signed - signedletter - education. Under his reign, russia experiencing a great expansion of its European territory to the west and south and a large déducation policy. Never indeed catherine should cease to be interested in education issues mainly for reasons of social order, from the beginning of his reign.

Catherine tried to spread primary education in Russia and created the School of the Academy of Sciences, the cadet corps (artillery and engineering) and smolny institute. Institutions that went along with the creation of some 300 primary and secondary schools for public education that will take long to develop. Document concerning direct its policy and requirements déducation: manuscript of a decree to the senate, signed by Empress Catherine of Russia ii (signed \January 28 1766.1p.

On a two-leaf folio (dimensions: 19.5 x 31 cm). Betskoy played a big role in creating the déducation system for youth in Russia of the eighteenth century. The culmination of his long career was perhaps establishing the first unified system of public education in Russia.