Brown-sequard Signed Autograph Letter Do Not Age Before Time 1890 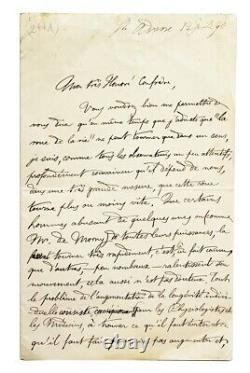 It presents a scientific way of prolonging human life, while developing a series of philosophical and epistemological reflections on mortality. In this letter, the successor of claude bernard at the college of france tries to push the limits of aging and to prolong the nerve action of the brain: not to age before time and to age as late as possible, that is... What must worry those who love life or those who, without loving it, need it to last. Brown-sequard had just published a study on the subject and claimed to provide safe nerve stimulation through the injection of sucks from animal testicles. Citing the example of the flamboyant duke of morny, fls d'hortense de beauharnais, who died at 53 years of age, the professor expounds a theory broader than the simple neurological remedy: it depends on men, that "the wheel of life" rotates more or less quickly.

Whether some men abuse a few or as m. From morny of all their powers, make it turn very quickly, this is a certain fact... The whole problem of increasing individual longevity consists, therefore, for physiologists and doctors, in finding what to avoid and what to do in order not to increase and, on the contrary, to delay the movement towards natural death." supporting the beneficial effects of animal testicular juices, brown-sequard compares them with a more harmful stimulating substance, strychnine, discovered a few decades earlier: "I believe I have managed to increase the various powers of action of nerve centers, without stimulating them, excite them, put them at stake, that is, without reducing them by the expense of their actions. Testicular fluid acts like strychnine, which does not determine action and only increases the reflex power of the spinal cord. But the difference between strychnine and the other dynamogenicant is that it makes the excitability morbidly exaggerated so that the least excitation causes nerve force discharges. Please note that the english version might contain errors of translation, we apologize if the formulas are inaccurate. He outlines a scientific method of extending human life, while at the same time developing a series of philosophical and epistemological reflections on mortality. Brown-sequard had just published a study on this subject and had succeeded in administering a harmless nerve stimulation with an injection of liquids extracted from animal tests. Giving the example of the flamboyant duc de morny, son of hortense de beauharnais, who died at the age of 53, the professor lay out a theory that is broader than the simple neurological memory: it depends on the person when the'wheel of life' spins more or less quickly. That certain men like m. De morny abuses all their faculties and makes the wheel turn very quickly, is beyond doubt... The problem in increasing the livespan of the individual lies, therefore, for physiologists and PhDs, in finding what should be avoided and what should be done in order not to increase, and indeed to decrease the progress towards natural death. Insisting on the beneficial effects of animal testicle extractes, brown-sequard compares them with a more nefarious stimulant, strychnine, discovered a few decades before: i believe i have succeeded in increasing the various force of action of the nerve centers without stimulating, exciting, or putting them in play, which is to say diminising them by making them expend them themselves in action. Testicular liquid acts like strychnine, which does not determine the action but which only increases the strength of the reflex in the spinal chord. But the difference is that strychnine leads to a morbidly exaggerated excitability, so that the lightest excitedly leads to discharges of nerve strength. This item is in the category "books, bd, magazines\old books, collection". The seller is "booksetgravures" and is located in this country: fr. This item can be shipped to the following countries: america, europe, asia, australia.