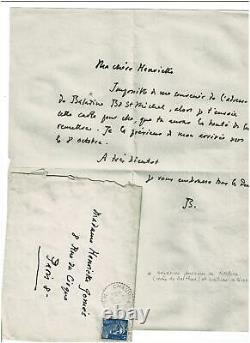 Autographed letter signed from balthus addressed to galerisre henriette gomes. A page written in black ink on a sheet, enclosed envelope. Transversal folds inherent in the shipment. Impossible to remember the address of baladine bd st michel... Baladine is the nickname of merline klossowska, the mother of balthus who was also the mistress of rilke.

In the summer of 1952, Balthus found a castle in the hare, between autun and avallon which he decided to rent and where he settled in the spring of the following year. The means are given to him by his merchants, henriette gomes, matisse stone and with them a collective of collectors, including maurice rheims, alix de rotschild and claude hersent. They pay him a pension in exchange for his last paintings which they divide among them. The castle is very degraded and Balthus lives there modestly in a continuous rehabilitation site.

He has to keep him company, help him settle down and ensure a presence when he goes to bet the poet lena leclercq, met through giacometti. The latter remained until the spring of 1955. Meanwhile, balthus began a loving relationship with her niece by alliance, friedric tison, daughter of a previous union of her brother's wife stone. English translation available upon request.

This item is in the category "books, bd, magazines\old books, collection". The seller is "booksetgravures" and is located in this country: fr. This item can be shipped to the following countries: america, europe, asia, australia.