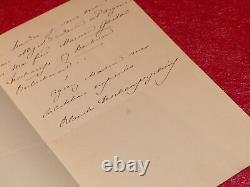 Autograph letter - lyrical art - opera. 1 letter on white paper. Marie blanche deschamps-jehin, born in Lyon on 18 September 1857 and died in Paris in June 1923. Was a French lyrical singer (contralto). His rich, supple and wide-ranging voice enabled him to pursue a prolific career between 1879 and 1905. In particular, she has created many roles, the most notable being the title role of jules massenet herodie. She studied at lyon and betting, before making her professional opera debut in 1879. Cute ambroise thomas, bruzzle change. She continued her career in this institution for a few years, notably interpreting the title role in the creation of jules massenet heroia in 1881, and uta in the creation of sigurd d'ernest reyer in 1884. She then joined the opera-comic troupe in the mid-1880s and sang there during that time. In particular, she will interpret the roles of margared in the creation of the King of Yes. D'édouard lalo (1888), ma'am of the dumbbell in the creation of massenet ashtrel (1899), and the mother in.

The creation of gustave carpenter. She also sings occasionally at the monte-carlo opera where she creates the title role of hulda. De césar franck (1894), and the role of the Baroness in massenet cherubin (1905).

In 1891 she made her first appearance in the opera of betting by playing leonor in the favorite of gaetano donizetti, then later playing fidès in the prophet of giacomo meyerbeer, amneris in aida de verdi, hedwige in guillaume telll de rossini, dalila in samson and dalila de saint-saëns, germrude in hamlet d'ambroise thomas, ortrude (lohengrin de wagner), and veronice in the creation of messidor d'alfred bruneau (1897). Her repertoire also includes carmen, azucena (le trouvère), erda (siegfried)1 and brangäne (tristan et isolde), of which she created French (10 September 1897, at the theatre of the great circle of the casino of aix-les-bains savoie). 1 sheet of paper, folded in its center forming 4pp.

This item is in the category "collections\letters, old papers\autographs\historical persons". The seller is "amideslivres" and is located in this country: fr. This item can be shipped to the following country: whole world.