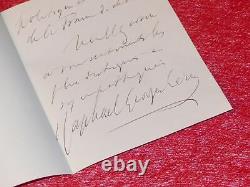 [Autograph letter - French economist xixe/xxe]. 1 letter to header from the institute of france. Let me tell you all the pleasure of your election, which bodes so well for the good political and economic direction of the france of tomorrow... Raphaël-georges levy (24 February 1853 - 8 December 1933) was a banker. He taught for many years at the Free School of Political Science.

He had liberal economic convictions, including support for the free trade and independence of the central bank. He was a senate senator from 1920 to 1927.

January 11, 1920 to January 8, 1927. Raphaël-georges levy was born on 24 February 1853 in Paris. His parents were Benjamin Levy and Eugénie Bamberger. His father was an inspector general of public education. Known as Jenny, was the daughter of August Bamberger and Amelie Bischoffsheim.

From the family of bankers bischoffsheim. His uncle, the banker Henri Bamberger, was co-founder of the betting bank and the country. The first cousin of the mother of proust.

Raphaël-georges levy grew up in an intellectual environment. He attended the Louis-le-grand high school, obtaining the first prize in mathematics and an honour prize in rhetoric, which earned him the personal congratulations of napoleon iii. After the Franco-Prussian War of 1870, he graduated in law. Lévy joined his uncle's betting bank and the country's low-lying countries, where he was responsible for several foreign investigations in which he showed his sense of business. He was interested in South African gold mines, furniture credit, the Franco-Chinese economic association and the tunnel under the handle. He left the bank and taught at the association of commercial courses, then at the higher school of financial education and finally at the free school of political sciences.

He spent 30 years in this last school, where he became one of the most eminent teachers. He became municipal councillor of deauville in 1900. Lévy became president of various learned societies such as the statistical society. He was elected a member of the Academy of Moral and Political Sciences in 1913. With the outbreak of the First World War (1914-18), Lévy remained betting and transformed his private hotel into a military hospital, keeping two modest rooms for him and his wife.

From 1914 to 1919, this hospital took care of soldiers at levy's expense. He was attended to the hospital by antoine-louis cornette, founder of the Scouts de france. On 9 February 1917, the figaro reported that by a large majority Levy had been elected president of the political economy society. The company had two presidents. Yves guyot had replaced paul leroy-beaulieu as the first president. Lévy was elected senator of the seine on 11 January 1920. He joined the Finance Committee and for five years was rapporteur for the freed regions budget. In 1923, he requested that military service be increased to two years.

It supports liberal economic policies and opposes laws prohibiting the export of capital, excessive taxes on securities that would threaten savings and obstacles to wheat trade. Presents numerous reports, including on the recasting of silver coins, the Moroccan loan and the loan project by the city of betting and the department of seine. Because of his declining health, he did not seek re-election in 1927.

He left office on 8 January 1927. Lévy was able to continue attending the sessions of the Academy of Moral and Political Sciences until 1930. In the last three years of his life, he has not left his private hotel in Paris.

It became a literary and artistic salon, where he was visited by the belgian king and the president of the Chinese Republic. Raphaël-georges levy died on 8 December 1933 in Paris.

Lévy has published many books on economics, but his first publication was a volume of poems inspired by alfred of musset. He contributed to the journal of the two worlds, the journal of political economy, the journal of economists and the French economist and wrote many books. In 1896, he proposed the creation of an international issuing bank with its dungeon headquarters, which would also clear international debts and loans based on gold.

In issue banks and public treasures (1911) levy argues that exchange rate stability depended on the independence of the central bank from the state. He writes that "less public authority is involved in the management of the banking system, the better credit and national wealth are protected". In the peace or the treaty of verses (1920), he defended the treaty of verses of 1919 against the attacks of the British economist john maynard keynes. He asked Levy for advice on his investments, then the two men exchanged several letters, it does not appear that the correspondence continued.. 1 sheet of blue paper, folded into its center forming 4pp. Paris, Monday, November 17, year not indicated. [Georgian origin or louis boulay]. This item is in the category "collections\letters, old papers\autographs\historical persons".