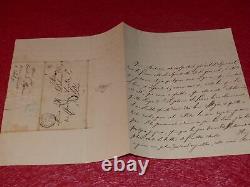 [Autograph letter - French politician xixe]. Letter addressed to mme delaveau. About the death of saurimont, Inspector General of Finance. Then various considerations about the bad harvest of the year in his Bordeaux vineyard...

What, madame, this inspector general so spiritual, whose wife is so spiritual and so gracious, next to whom I was having dinner a few months ago, who listened so well, and answered even better, it was he who went away, who left us, who died! I complain to his wife very sincerely.. there is little [joy] in our vineyard either, this year, we have no memory of a man of example of such a shortage; I had made 350 barrels two years ago, I will only make 40 of them perhaps just a moment ago.. I say earlier because the harvests were singularly delayed.

Hostile to the empire, he rallied to the bourbons, to the restoration. Pierre-denis, Count of Peyronnet, is the "son of Messire jean-louis peyronnet, squire, treasurer of honorary france at the finance office of Guyenne, and of beautiful pink lady, of the parish of Puypaulin". His father, who had bought shortly before 1789 a position as king's secretary, giving the nobility.

Perishes on the scaffold during the terror. After studying law at M. Ferrère, he was appointed a lawyer in 1796, as well.

His childhood friend then political rival the martignac Viscount. Along with him, he was a member of the company of vaudevillists of bordeaux.

On 26 October 1815 he was appointed president of the court of first instance of bordeaux, then. A year later, attorney general with buds. Elected on November 13, 1820, Member of Parliament for the Grand Collège du Cher, he settled in Paris. Appointed Attorney General of the Royal Court of Rouen, he was called on December 14, 1821. To take the portfolio of justice.

1822 King Louis xviii created him Count, as did his roaring and ravenous colleagues, and placed in his arms a sword, with the motto "non solum toga". He was also appointed in the same year. Officer of the Legion of Honour. From September 6 to October 29, 1822, he served as interim minister of the interior. Re-elected on 6 March 1824 as a member of the dear's parliament, and as a member of the gironde, he opted for the gironde. A member of the private council, he was made a great officer of the Legion of Honour in 1825. He still occupied the interim Ministry of the Interior from 9 July to 2 August 1825. And from August 30 to September 19, 1826. King charles x named him pair of france on January 4, 1828. And he left the Ministry of Justice the next day.

On 19 May 1830, finally, he returned to power by becoming minister of the interior for the fourth time. Position he held until the fall of the regime. After the revolution of 1830, he appeared with mm. Polignac, chantelauze and guernon-ranville in front of the court of peers, under the charge of high treason, and is condemned, with his colleagues. Perpetual prison and civic degradation.

Enclosed at the fort of ham, he obtained the remission of his sentence on October 17, 1836, on the basis of the collective pardon decided upon at the instigation of the first Mole ministry. He returned to his castle of Saint-louis-de-montferrand to fully exercise his passion for poetry. The count of peyronnet defended in parliament the following main measures. The Freedom of the Press Bill, 1822. The sacrilege law, in 1825.

1 sheet of white paper, folded in its center forming 4pp. 3 handwritten pages, and handwritten address on the back. (folded: about 15,5x11,5cm). [Georgian origin or louis boulay].

1 tear on edge page 3-4. This item is in the category "collections\letters, old papers\autographs\historical persons".