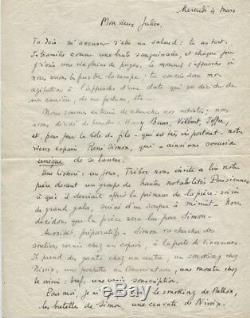 Ambitious and optimistic, he has just staged the play that he hopes will soon be playing, glory of the merchants and tells the first private representation. I work as a bloodthirsty brute, and every day I write about twenty pages. The time is approaching when we will see the limelight; So you see my agitation approach a date that will decide my career, my fortune, etc .... one day Trébor invites us to read our piece to a group of high Parisian notables that he wanted to offer the premiere of the play: large gala evening followed by dinner at midnight.

We decide that the piece will be read by simon. Simon will look for polished shoes at a friend at the Vincennes door. It takes the gloves in another, a tuxedo at Nivoix, a conservatory wallet, a watch at the neighbor: in short a true subscription.

For me, I teamed up with the tuxedo bellon, the straps of Simon, a tie Nivoix. As for Nivoix it flies buy collars and cuffs, a pair of socks, and strives to make the best use of a silk shirt, once splendid. We arrive at the appointment in a taxi, paid for by a fee. In a huge library, we find monin owner houbigan, mayor, large feather merchant Parisys, Trebor, beautiful jickiss of Mayol concert, which shows naked each night to 2,000 people, and seemed embarrassed to be dressed front of so many people ... Adds some women fitted with diamonds - o my mother!

Successful or not, I bailed out the financial perspective. An oven always give 20 performances ie 10 to 12,000 for me. A success, that is to say 100 performances with the public, not give away 100,000, with sales abroad. On 15 April 1925, Marcel Pagnol, yet English teacher in high school Condorcet in Paris, plays in the theater of the madeleine glory of merchants one of his first pieces co-written with Paul Nivoix. The play will be performed from April 15, 1925, the theater of the madeleine: it is the first of pagnol played in Paris. Photos and additional descriptions on request.

Transfers and bank checks (France) are also accepted, as well as remote cb. Prices are fixed and adjusted, packaging (neat) is offered. Possible removal bookstore (Orleans), and by appointment in paris. Meets uses of the International League of Antiquarian Booksellers.

The ordered items are guaranteed to return in 14 days. Returns costs are the responsibility of the buyer.