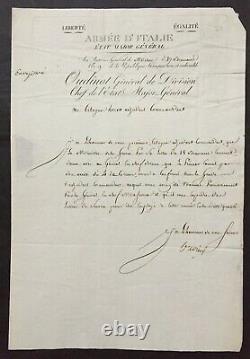 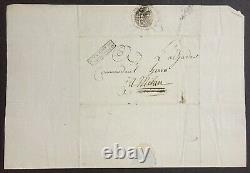 [dialie army] Marshal Oudinot signed letter to General Dhervo 1800. "The Marshal with the 35 wounds." Constantity earned him the rank of general of division. Chief of Staff of the army of Italy, he is responsible for bringing to bet the news of the peace signed in treviso. Great eagle of the legion of honor in 1805, he seized to come, distinguished himself in austerlitz, led to victory at wagram, marshal of empire in 1809. In 1810, Napoleon entrusted him with the government of the kingdom of holland in place of louis bonaparte and was twice governor of berlin. He helped to secure the remains of the French army the passage of the Berezina and participated in all the battles of the empire until the fall of Napoleon. Letter signed by Marshal Oudinot "Oudinot", then Major General and Head of the Major-General of the Dialie Army, to the headquarters of Milan, 27 Brumaire an 9 (18 November 1800), 1 page, vignette "Armée ditalie etat Major-General", addressed to General Dhervo (address on the back: "a ladjudant commandant hervo à milan"). Letter of confirmation in the rank of Warrant Officer-Commandant in the army. Promoted brigade general in 1807, after the battle of deylau, and commander of the Legion of Honour in 1807 at the end of the Battle of Friedland. Created Baron of the Empire in 1808, he found a glorious death near deckmühl on 21 April 1809. Good condition sent by registered mail. The item "Armée daitalie maréchal Oudinot letter signed to General Dhervo 1800" has been on sale since Monday 22 November 2021. It is in the category "collections\letters, old papers\autographs\historical persons". The seller is "*epistole*" and is located at/in bets. This item can be delivered anywhere in the world.