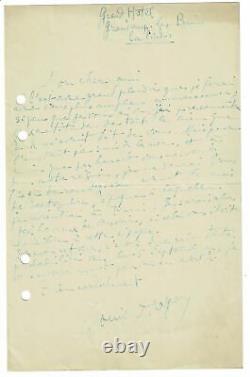 Aragon louis - signed autograph letter. Signed autograph letter addressed to a correspondent that we have not been able to identify. Written from the large hotel of Grandcamp-les-bains (calvados) in blue ink on a sheet filled with white paper. A transverse fold inherent in the folding of the missive and four small perforations affecting the text but not hindering its reading. The mention of grandcamp-les-bains - where aragon seems to have been only once in the summer of his seventeen years - and the signature - of an early form - suggest that the letter might have been written in the summer of 1914. Philippe forest, in his biography of aragon, confirms that it is indeed at grandcamp-les-bains, where his family had rented fifty rooms in a large seafront hotel to house family and friends, that the future poet learned the news of mobilization. The writing, less round than on manuscripts prior to the 1920s, seems to us later, and so we are not in a position to confirm the date of 1914. English translation available upon request. This item is in the category "books, bd, magazines\old books, collection".