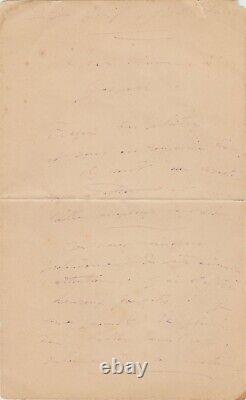 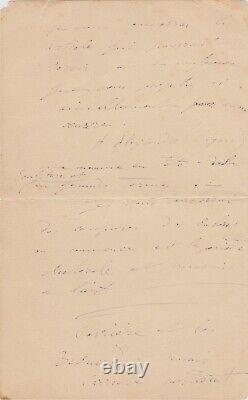 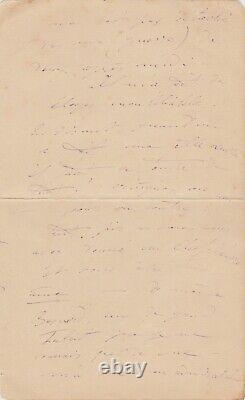 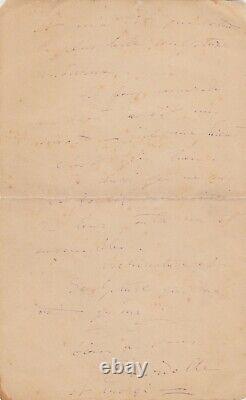 Signed autograph letter to Raphael Gasperi. Autograph letter signed, bet, 22 April 1902, 4 pages in-8°, to raphaël gasperi. Beautiful letter on the first major bumblebee opening, written a few days after the opening of the exhibition organized by the National Society of Fine Arts. During this edition, he presented his monument to the deaths of the 1870 Montauban War.

The origin of this work dates back to 1893 when bumblebee entered the august rodin workshop as a practitioner and took part in the contest for the monument to the death of the 1870 war in Montauban, his hometown. While facing a harsh opposition after presenting his model, he finally obtained the project thanks to the support of rodin. Completed in 1902, the sculpture will be presented at the salon before being inaugurated on September 14 in Montauban.

In 1970, his "war" was transferred to bumblebee. We also notice the beautiful critique of thilda harlor published in the feminist newspaper the sling that notes, before censoring the perseus of camille claudel: "We will salute there the admirable monument of bumblebee: homage to the dead, the fighters and the servants of tarn-et-garonne (war of 1870-71). It is a superb momentum, of rare power. There's nothing fixed, there's nothing crowded. The masses have an impeccable balance. (The Sling, April 19, 1902). In his letter addressed to the painter Raphael Gasperi, he mentions the arsene critic Alexander for the figaro: "[.] the novelty of arrangement consists in that a part is exposed in the garden outside the palace. Do not omit to go, for otherwise you would miss some of the capital works: the considerable and powerful group of the war, by m.

Emile bourdelle, opens with long effort, masterful success, which will finish putting this artist in the foreground [.] (The figaro, 19 April 1902). He adds that the Eugene career painter and the couple besnard (albert and charlotte) "did not break away from [his] (war) of two afternoons.

His career friend even adds that when you "made such an opening, you have to fuck everything! Criticism or not - for or against. Finally, he underlines the silence of his comrades: "The good comrades have not told me a word - they flee me it is very good. So I'm not nice it's true to give them such a set: architecture and sculpture that are one. Raphaël Gasperi is a painter who was also curator of the Brive Museum (labenche museum) from 1912 to 1935.

A true enthusiast, he devoted his whole life to a cult of beauty and long sought to spread his ideas. Faithful republican, he was convinced that the common admiration of the beautiful could appease social hatreds.

He was a friend of rodin who was probably at the origin of the encounter between gasperi and bumblebee. Receipt the plasters and thank you very much. They are of a very endearing character and of a beautiful extent of vision. Thank you very much for your kind attention.

I was very happy for your canvas, I promise to go and analyze it at the salon one of these mornings. I will send you the articles that can be used at the conference that you so kindly project for my work.

A Alexander (figaro) appoints me at the head of the sculpture and in great terms. I'll send you the cuts to the fairs, we'll start and the election period is bad for art. Career and besnard - but career especially did not break away from my (war) of two afternoons. He gave me unforgettable praise.

Saying when you've made such an opening, you've got to give a shit! So much - you have given us a masterpiece and you are a soul - the same besnard, a great talent that I know only from sight - has shouted to me his admiration and told me that it was the most beautiful modern sculpture. Good comrades didn't say a word to me - they're running away from me is very good.

Well, you're a bumblebee. English and Russian translations available on request. Shiltonson is a member of the national union of the ancient and modern bookstore / international league of the ancient bookstore.

Third Republic at peace (france). Text fully readable but ink greatly pale. Slight tear in the upper margin and in the central fold. Antoine Bourdelle, born émile-antoine bordelles, is a French sculptor. He was the pupil of auguste rodin, professor of giacometti and matisse henri, and an important figure of the art deco movement and the transition from the fine-art style to modern sculpture.

His workshop became the bumblebee museum, a museum dedicated to his work, located at 18, rue antoine bourdelle, in the 15th. Raphaël Gasperi is a painter who was also curator of the Brive Museum (labenche museum) from 1912 to 1935. A friend of Rodin's, this true enthusiast devoted his whole life to a cult of beauty and long sought to spread his ideas. More information about bumblebee antoine. This is an authentic letter. Our letters are accompanied by a descriptive sheet including a transcript. The invoices and cards we issue are instead of a guarantee certificate. France free shipping private carrier on request. Shiltonson Rare Books & Manuscripts. This item is in the category "collections\letters, old papers\autographs\historical persons". The seller is "shiltonson-paris" and is located in this country: fr. This item can be shipped to the following country: whole world.