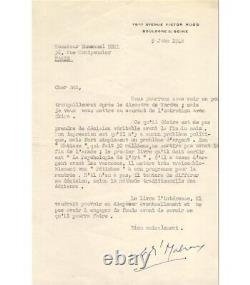 Typed signed "Andre Malraux" to "Dear Friend" [Monsieur berl, rue de montpensier paris]. Interesting letter concerning the Swiss art publisher Albert skira. We'll be able to see each other a little quietly after Verdun's speech... Does he say, but it's mostly skira that he wants to maintain.

I want to let you know about the skira interview. What he wants is not to make a real decision before the end of the month.

My impression is that there is no political problem, but very simply a problem of money. His "matisse" which makes thirty million, will not come out before the end of the year; the first book he must come out is "the psychology of art". If he has enough money before the holidays, he will most likely put your "fetches" on his program for the new year. If he does not have one, he will try to postpone his decision, according to the traditional method of publishers. The book interested him, he would like to be able to dispose of it eventually and not to have to commit funds before knowing what he could do..

malraux had started publishing his essays on art at skira the year before this letter (in 1947) under the title. An editorial project that lasted until 1949. Born in Geneva, Albert skira has published since the 1930s luxurious editions illustrated by picasso. Becoming one of the most famous art publishers of the 20th century thanks in particular to the magazine.

That he manages in collaboration with the future editor tériade de. , it offers artists, some still unknown as giacometti, robert matta, hans bellmer, paul delvaux, an important space where painters, poets, writers, architects and ethnologists respond.

He was a friend of those whom he published, from picasso to Breton, from matisse to éluard, from derain to dali, from malrals to battle. Abandoning his secondary education very early, andré Malraux took courses at the Musée Guimet and at the École du Louvre. In 1923, he went on a mission in Indochina with his wife clara.

Arrested for kidnapping a bas-relief from a temple near angkor, he is brought to justice and sentenced. Back in france, he began publishing and entered the Gallicard Reading Committee (1928), then became the artistic director of the famous publishing house.

He later published two of his most important works for his fame: the Royal Way in 1930 and. In 1933 he won the goncourt prize. In the 1930s, he committed himself to fascism and took part in the war of spagna with the Republicans, an experience which he transcribed in his novel.

After the war he met (in 1945) General de Gaulle, who appointed him Minister of Information. Shortly afterwards, from a gaulle out of power, Malraux put his political career in brackets and worked on studies on art that would lead to the publication of a scholarly ensemble published in 1951 under the title of the voices of silence. When he returned to power in 1958, he was appointed to cultural affairs, a position he assumed until 1969. This item is in the category "collections\letters, old papers\autographs\historical persons".

The seller is "bibliolibrum" and is located in this country: fr. This item can be shipped to the following country: france.