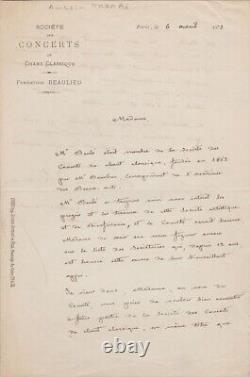 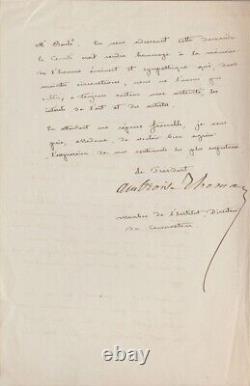 Letter signed, bets, 6 April 1875, 2 pages in-8° on paper with header of the society of classical singing concerts, to Madame charles-ernest beule. The president of the company asked the widow of the archaeologist and politician charles-ernest beule, who died prematurely the previous year, to join the company in the same way as her late husband. The committee would be happy to see its name always on the list of members and this would be a way of "committing to the memory of the eminent and sympathetic man who, in many circumstances, we have not forgotten it, has always supported with authority, the interests of art and artists. The life of charles-ernest beule is perfectly related in an article of yves billiards and christophe chandezon.

The first paragraph quickly made it possible to realize this tragic destiny: "on the night of April 3 to 4, 1874, around midnight, a man who was one of the pioneers of French archaeology in Greece and that politics had finally seduced to the point of making him an ephemeral minister of the interior suicide at home, in bets. The gesture by which ernest beule ends his days is worthy of the ancient. Suffering for a few weeks from a painful illness in the heart, he grabs a dagger of a set that adorns his room and sinks it into the chest.

He leaves a word: "I suffer too much, it is even stronger than in the gym; I will search the seat of evil. At the time, this gesture was compared to that of lucrèce, who had also pierced his court, but to wash the dishonor of his rape by one of the tarquins. We know this: for Roma, the suicide of lucrèce had led to the fall of the monarchy and its replacement by the republic. The comparison was probably not innocent because beule had opened with all its strength, but without success, to the reconciliation between the count of betting and the count of camelboard and thus to the restoration of the monarchy in france. From this failure was to be born the republic.

The reference to the suicide of lucrèce is not surprising: beule had no doubt for a very long time known the famous texts of tite-live and plutarque which recounted the death of the heroic Roman. She had also been represented on many paintings of painters whom beule loved, such as cranach, botticelli, dürer, veronesis, rembrandt or fragonard. By the references she put in place, the death that beule had just given herself was thus a striking conclusion to the careers of the archaeologist, the historian, the aesthetist and the minister.

Classical archaeology, Roman history and politics under napoleon iii", liame. Beulé was a member of the society of classical singing concerts, founded in 1863 by Mr.Beaulieu, correspondent of the académie des beaux-arts. Beulé has always followed with interest the progress and the work of this artistic and charitable society, and the committee would be pleased, Madam, to see its name still on the list of members who, for 12 years, have honoured this opening with their kind support. I therefore come, on behalf of the committee, to ask you to consent to be part of the society of classical singing concerts, in the same way as m.

In addressing this request the committee believes that it pays tribute to the memory of the eminent and sympathetic man who, in many circumstances, we have not forgotten it, has always supported with authority the interests of art and artists. While waiting for a favourable response, please accept the expression of my most respectful feelings.

Third republic at peace (france). Ambroise thomas is a well-known French composer in xix. Century for his operas, including the famous one. More information about ambroise thomas.

This is an authentic letter. Our letters are accompanied by a descriptive sheet including a transcript. The invoices and cards we issue are instead of a guarantee certificate.

France free shipping private carrier on request. Shiltonson Rare Books & Manuscripts. This item is in the category "collections\letters, old papers\autographs\historical persons". The seller is "shiltonson-paris" and is located in this country: fr.