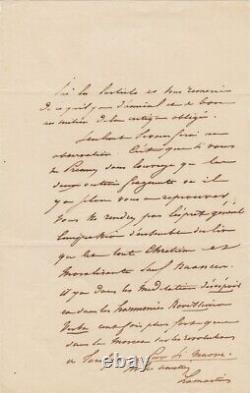 Signed autograph letter, without place, [1836], 1 page in-8°. The poet responds to the article of a critic on jocelyn and makes an observation to him on the fact of extracting only "two or three fragments" that cannot render the general spirit of jocelyn.

He mentions two of his most famous works (poetic meditations and poetic and religious harmonies) to support his comment: "There is in the despair meditations and in the novissima verba harmonies a hundred times stronger than in the song on the resolutions of jocelyn. This is not the first time that Lamartine has been accused of an attack on Christianity in jocelyn. In a letter addressed to his first cousin, Baron Alexander Carra de vaux, he stated this misunderstood: "[.

] So you wrongly share the common mistake that attributes me the intention of hostility towards Christianity in this or in jocelyn. I am a Christian with little interpretation. The little good that is in us comes from there, and I will always venerate the source where our souls have drawn everything.] (correspondence of lamartine, volume v, dclxxviii) also, in the post-scriptum of previous editions found in the complete works of lamartine (1860), the poet clarified his intentions: "[.] Some people believed in jocelyn two intentions of the book on which the author must explain himself: a plea against the celibacy of priests; an attack on religion: these people are mistaken.

] as to an attack on Catholic Christianity, it would also be unknowing and the instinct of the poet and the moral tact of man, to suppose an intention of hostile polemics in a work of pure poetry, whose only merit, if he had one, would be the moral and religious feeling of which each verse is impregnated. I have read the article and thank you for what is friendly and good in the midst of the required criticism. Only I'll make you an observation.

It is that if you take in the book only the two or three fragments where you think there are to resent, you will not return the general spirit, the overall impression of the book that every Christian and moralizing person reads without nuances. There is in the desperation meditations and in the novissima verba harmonies a hundred times stronger than in the song on the resolutions of jocelyn. English and Russian translations available on request. Shiltonson is a member of the national union of the ancient and modern bookstore / international league of the ancient bookstore.

Autographed letter signed by L. Alphonse de lamartine, of his full name alphonse marie louis de prat de lamartine, is a French poet, novelist, playwright, and a political figure who participated in the revolution of February 1848 and proclaimed the second republic. He is one of the great figures of romanticism in France. More information about lamartine alphonse. This is an authentic letter.

Our letters are accompanied by a descriptive sheet including a transcript. The invoices and cards we issue are instead of a guarantee certificate.

France free shipping private carrier on request. Shiltonson Rare Books & Manuscripts. This item is in the category "collections\letters, old papers\autographs\historical persons". The seller is "shiltonson-paris" and is located in this country: fr. This item can be shipped to the following country: whole world.