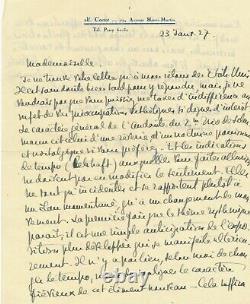 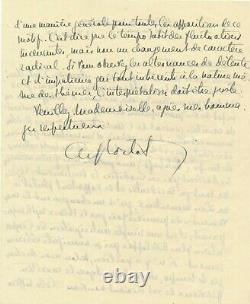 1 page and a half in-4. On the edge of the second schumann trio. He found his correspondent's letter late on his return from the United States. "I wouldn't want you to tax me indifference about your aesthetic concerns so worthy of interest." "The general character of the second schumann trio is that of a peaceful and nostalgic night dream if you prefer. And the indications of time to which you refer must not change the course of it. They are only an incident and relate to a momentary momentum only to a change of movement.

The first time the rhythmic theme appears, it is a simple anticipation of the more developed exposure that manifests itself later. In my view, there is no need to change the tempo, but to emphasize the feverish nature of this new element. This will generally suffice for all appearances of this pattern.

That is, the tempo undergoes constant fluctuations, but not a radical change of character. If you observe the alternations of relaxation and impatience that are inherent in the very nature of the theme, the interpretation must be correct.

" The item "alfred cortot beautiful autograph letter signed on the second trio of schumann" has been on sale since Wednesday 7 July 2021. It is in the category "collections\letters, old papers\letters".