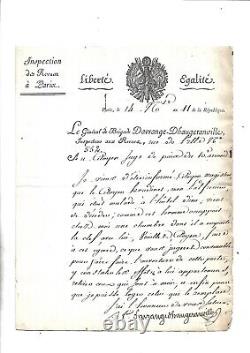 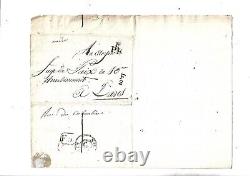 And served since then, with the permission of the marechal-prince of soubie. As a volunteer to the Angoumois infantry regiment. Although still counting in the body of the gendarmes of the guard. He worked with the Angoumois regiment on hanovre campaigns.

From 1757 to 1760, those of 1761 and 1762 in Germany, together with the gendarmerie corps, were employed in the colonies from 1763 to 1767 with the Angoumois regiment. Aide-de-camp du lieutenant-general d'ennery during the campaigns of 1768 and 1769, in Corsica. He passed as a flag-bearer in the Angoumois regiment on. Charged with the body of that body on.

He became a Petty Officer-Treasurer on 1 July. Gets the rank of first lieutenant on the day. And received the commission of captain to the Royal Russel regiment. With 800 livres of pension on.

Major of the King's Gate Guards. With the rank of lieutenant-colonel, then colonel, he has the command of this body in the court, and that of the king's hotels and residences. In the chapel of the war hotel. Ingénieur-geographe et sour des princes de neuchâtel. Together, they met charles jean stone marie, baron d'abrange d'haugeranville et de l'empire. He receives letters confirming the title of Count. And is reformed to the removal of the guards from the door on. His distinguished services have earned him several annual pensions on various occasions on the ministry of war and the king's house. Books that he touches on the funds of the order of Saint-louis. Of which he is a knight. He remains unemployed until the 9th ventôse an viii. Age at which he was appointed inspector of journals, employed in the. Military Division, at the same time in charge of the service of the Gallo-Battle Army.

Inspector at consul custody magazines. It passes in the same quality in the.

The 4 germinal of the last year, it brings together the two departments for which it is already in charge of the chief inspector of the northern army. To which the Prince Louis-Napoleon. Names it the 27 mist an xiv.

With part of the northern army, he resumed his duties as an inspector in the area. Military Division, is again in charge of the service of the. And resigns himself from his duties on. Appointed to retirement on 1 July. He died on the day.

Arms of the Earl of Avrange d'haugeranville. Azure, chevron broken with gold, accompanied by three besants of the same. Lievyns, verdot maurice jeans, begat stone. Fastes of the Legion of Honour: biography of all the decorated accompanied by the legislative and regulatory history of the order. Rietstap - and its complements. List of the generals of the revolution and the first empire. Portal of the French Revolution. Portal of the first empire. Knight of the royal and military order of Saint-louis. French count of the 18th century. General of the French Revolution promoted in 1791.

French military of the 18th century. The last modification of this page was made on 18 April 2022 at 17:18. This item is in the category "collections\letters, old papers\autographs\historical persons".

The seller is "yesterday024" and is located in this country: fr. This item can be shipped to the following country: whole world.