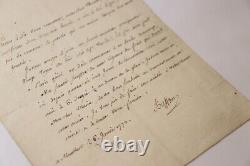 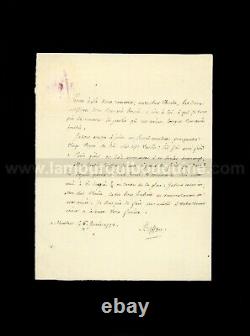 The writing of this letter. His immense book entitled "natural history" is still in.

Course of publication this unique sum of its kind was published between 1749 and his death. With many supplements then appeared by laceped - in 1772 the birds are in.

The publication of birds will not be completed until 1783. In this buffoon letter written to his young friend and collaborator remained in betting. Written from his Montbard office. It was precisely in 1772, little time. After the writing of this letter the forges located near the village of will be completed.

Buffon writes to thouin in these terms. [Transcript of the letter / spelling respected:]. Lucas must have given you, my dear thouin, the two certificates you have. Need and it's to him who I beg you to hand over the part that belongs to me.

I am sending you attached a second term of office for. Take twenty voys of wood from the sr. Vaslin; if it is as cold as here.

We need to start burning a lot of them. My health suffers from this rigor of.

Cold which lasts here for four to five days, the termometer was last night at 6. Degrees 1/2 below the ice. Thank you, my dear thouin, for yours. Good wishes for this year's renewal. Loved your good mother and family.

Buffon manages bets most often from his Montbard cabinet while the Thuin reveals itself. Be a perfect collaborator as close as possible to the many works to carry out and manage the garden. Thuin will have an important career and will always be very much appreciated by buffalo. Many letters from buffalo to thouin were published in the general correspondence.

From buffoon as well as in the volumes of unpublished correspondence published later. Letter that we propose here is not in these volumes of correspondence. Moreover, we found that the published exchanges between buffoon and thouin. Dated from the early 1780s and later years. Such a mail between the two men to.

The date of January 1772 shows the content of trade in the first years after. Appointed a young thouin in the king's garden since 1764. Very nice document signed by the great naturalist. This item is in the category "collections\letters, old papers\autographs\historical persons".

The seller is "lamourquibouquine" and is located in this country: en. This item can be shipped to the following country: whole world.