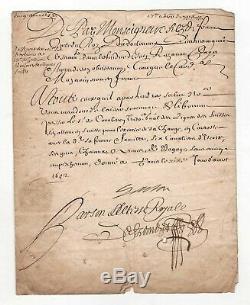 Duke of Orleans, the third son of Henri IV, Louis xiii brother and uncle Louis XIV. Signed \Passport issued for claude corberon. This was after the aristocratic or armorial General of the Lorraine and Barrois, adviser to the king, treasurer general of the Swiss lines. On the death of louis xiii.

Gaston of Orleans had been appointed lieutenant general of the kingdom. He took part in the sling and plotted against Richelieu.

Shortly after the date of this document, in the fall, Gaston d'Orléans must be exiled to Blois by order of Mazarin. The item \historic \The seller is \This article can be shipped worldwide.