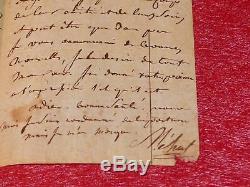 Autograph letter signed - French eighteenth music. (To valadier, author of Cora booklet). Indication in pencil at the bottom of the slip. Forgive me my dear friend, if I do not answer more accurately the charming letters you write to me; First I'm in right now exhausted from work, my time is barely enough to raise our. Item at theater, to understand it in particular at every moment, and to make corrections ..

I removed the role of Cora to miss spur to offer miss buff but she refused ... Etienne Nicolas Mehul, born in givet (ardennes) on 22 June 1763 and died in Paris October 18, 1817, is a French composer, \Etienne-Nicolas Mehul is also a founder of the Conservatory of Paris. Leaving the Abbey of Laval God, where he was student organist for the capital, he crossed indeed one. Of the most turbulent periods of the city, mainly focusing on creating music, even if he was also the composer of one of the most famous patriotic songs from this period. And if he was a friend of many artists and writers.

He was one of the first musicians called \And his operas have profoundly influenced Hector Berlioz who said of him. \Who does not bloom without culture and quon withers of a breath; what is not in the melody only, but all contribute to the unborn make or destroy: melody, harmony, modulations, rhythm, linstrumentation, the choice of low registers or treble voices and instruments, degree of speed. Or slow the execution, and various shades of force in the show's sound. Stephen was born at Givet on the Meuse in the Ardennes. His father, Jean-Francois, was First of butler of the Count de Montmorency and small wine shop at the death of the count.

Parents with detected early gifts of small Etienne, but is too poor to offer regular musical education, the child received his first lessons of a poor blind organist called \His skills were such that, for ten years he was appointed organist at the convent of the Franciscan Recollects always givet. In 1775, a German musician and organist schussenried abbey, the monk Guillaume Hanser, was hired by Father remacle smoother, the monastery of Laval-Dieu, near Givet, to found a music school. Mehul became his occasional student, in particular counterpoint, and his deputy in 1778. On the organ in the village church is the former chapel of the abbey, that read \Hanser monk and organist laval-god.

Fifteen years old in 1779, Mehul came to Paris thanks to the generosity of a benefactor who washed heard at the podium; armed dune reference letter of intent gluck. \Javais a letter of recommendation for gluck, cétait my only desire in entering the capital, and this idea. I was thrilled with joy. He took lessons with Jean-Frédéric edelmann, a harpsichordist much appreciated in Paris, installed since 1775, he and friend of Mehul idol, gluck.

Edelmann of Strasbourg origin, was Jean-Louis Adam also for student and returned to his hometown since the revolution when he was guillotined at the end of terror in July 1794. Upon his arrival, he attended the first diphigénie in tauride and was very moved. His first composer weapons consisted in adapting popular tunes dopéras: Theseus Gossec.

A sacred ode Jean-Baptiste Rousseau was played at the spiritual concert in 1782. The first published composition Mehul was a book of three sonatas for pianoforte in 1783; he was just twenty years. In 1788, a new collection of sonatas form his Opus ii. Through these publications, \In 1786 Mehul lolympique joined the Masonic lodge of perfect esteem (established in 1782), in his musical part. In this, it shares this trait with many musicians of his age: Gossec, Cherubini, becomes, philidor, Pleyel, St-George, viotti etc.

It is in this box that the Paris symphonies. Joseph haydn were interpreted (1787). Later, he composed lyrical incidental music for the lodge of the Grand Sphinx, of which he is a member.

On the occasion of the funeral of 20 October 1808 Henri Belleteste, member of the Institute of Egypt. Mehul considering a dramatic composer career. Although presented in royal academy of music, opera will be mounted six years later.

At the same time Mehul found in the person of Benedict librettist François-hoffmann, his favorite collaborator. It gives the text of his first opera represented, Euphrosine, or corrected tyrant. The first, the room favart September 4, 1790, was a huge success and marked the composer by the talent quon recognized him. His career was launched and the dune cétait beginning long relationship with the theater of the Italian comedy. (Renamed comic opera in 1793).

Only presented February 4, 1791, and the ban dadrien by the municipality of Paris for political reasons in March 1792, Mehul has consolidated its reputation with works such Stratonice (favart, May 3, 1792) or Mélidore et Phrosine (favart, May 6 1794). From the revolution until the empire.

During the revolution, Mehul composed many patriotic songs and propaganda pieces. The most famous being the song of departure (1794) on a poem by chénier, which is like a second Marseilles. The commitment of Mehul was rewarded with his appointment institute of France in 1795, with Gossec and André Grétry. The same year, he won one of the five positions of inspectors of the Conservatory of Paris, when it was founded on 3 August, on the initiative of Bernard Sarrette, captain of the National Guard.

The musician became one of the most dynamic members. Mehul was on good terms with Napoleon ier He became one of the first French to receive the Cross of Knight of the Legion of Honor (1804), along with François-Joseph Gossec and André Grétry.

In 1807 he won the second prize of Rome (the first is not awarded) with a cantata Path to Naxos. This award is shared with fetis.

The success of Mehul's operas was not so great at the beginning of the nineteenth century qua the late eighteenth century, however, works as Joseph (1807) were celebrated. The first consul Napoleon, who was very fond of vocal music, louvrage reward. Two arias including: paternal fields, Hebron, gentle valley.

And barely out of childhood were very popular. Opera made a career abroad, particularly in Germany.

However, the failure of his opera Amazons in 1811 (presented in opera December 17) was a severe blow and has ended his career as a composer for the theater. He then took a well deserved retirement in his house puppet, to cultivate \Despite his ties with Napoleon, the musical career of Mehul suffers no point of restoration, especially as he knew not to compromise himself during the hundred days.

Thus, he was appointed at the conservatory in 1816. Retired in hyères time between January and May to find some rest and relief from his tuberculosis (TB), the composer died of this disease in Paris on the morning of October 18, 1817 , his home.

At 28 rue de Montholon, aged 54. 1 sheet of paper, folded in its center forming 4pp. 3 handwritten pages and recipient's name on a page. Or from george louis boulay.

From family, \Good general condition, various minor usual defects. Small lack of paper to sign. \The seller is \This article can be shipped worldwide.